An addendum or two for Berthouville

I may yet find the Seated Centaur in the Naples Museum, but for now:


It was mad with my old Nikon, with its single lens, knowing that even if flash photography had been allowed, it didn't work in those old galleries and through glass, but I took it at about 1/30 sec and f2.0—I so desired to have an image of at least one of the cups.  I share it because at least it looks like silver, faintly tarnished, in real light and real space.

Mosaics are much easier, and the huge central galleries of the Pergamon Museum are as bright and open as any century-old galleries could be.  Also, these royal Pergamene mosaics seem to me to represent the pinnacle of Hellenistic (and specifically Pergamene) skill and taste.  This would be the standard that Hadrian wanted his art at Tivoli to aspire to.  The colors are pretty close to true, as true as scans from 30-year-old slides can be: both lively and subtle.

More and more I am possessed by the desire to understand both the endurance of the traditions and what they suffered in the course of time and change.  I mean, much as I love the Piazza Armerina mosaics, which date from the Imperial Tetrarchy, or even from the reign of Constantine, and themselves are palace art, they are about 480 years later than, say, Attalos II at Pergamon.  I mean, there must have been a real passion to hold onto their traditions.

Not aware that this beautifully carved well head would not be found in most of the handbooks, I later realized that much of our UC Berkeley 1950s slide collection had been made from Rodenwaldt's Die Kunst der Antike,  evidently, I was struck by the perfectly preserved sacro-idyllic background to the lion and the ewe, where there may have been restorers' work; after all, the finding place of this piece was not known, so the Julio-Claudian dating given it must be based on style and technique.  Now, older, I gave thought also to the longevity, as much as half a millennium, of the sacro-idyllic manner, evidently expressing the neverland, bucolic character of Theocritan poetry from the High Hellenistic third century BCE.  The landscape background of the "Tellus" relief of the Ara Pacis Augustae and the stucco ceiling of the Farnesina house give us the very delicate Augustan version of this, with the large and substantial female figure of the "Tellus" dominating.  Here, too, the substantial, high relief animals are so dominant that in my undergraduate youth I hadn't paid much attention to the dainty flowers and the delightful gnarled branches set off by Dionysiac paraphernalia and richly rendered rockwork.  Now, in the 1980s (but still on film with a Nikon F2), I took the details shown here.  I still hadn't thought that it has to have been the higher-relief, richly undercut carving that also distinguishes Julio-Claudian architectural decorative relief that, as J. B. Ward-Perkins pointed out (Roman Imperial Architecture, Penguin, PB edition, p. 40, fig. 16), must be post-Augustan restoration.  The Berthouville cups, for their part, are similarly distinguished from Augustan silver.  One must always be careful not to relish and swallow what one has just understood for the first time, but the insight (better gotten late than never!) has been borne out by all the pictures of Roman art that I have had access to.  Doubtless J. Babelon saw it, too, but there, in a nutshell, is the difference between learning and memorizing; such as I am, I could not rejoice more than I do in realizing it.  But I mulled it over for weeks before writing it here. 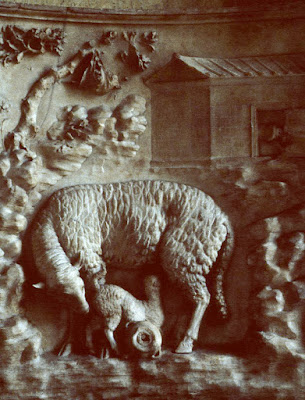 Vienna, Kunsthistorisches Museum.  One of the pair of reliefs from an indoor fountain, with mother animals in sacro-idyllic settings.  There is some conservators' work, but mainly in the animals (the lion's face, for example).  Rodenwaldt's  KdA places them in the Claudian section, but I do not have available data for their find-spot, though I suppose in Rome.  I suspect a little more restoration in the sheep than in the lioness/

The other thing that I want to share is my wonder at the longevity of a vital sacro-idyllic manner to about a half millennium.  It begins to be rather academic, I think, under Hadrian or, at any rate, under the Antonines.  Here it is still alive, but after Septimius, at the latest, it never revives, no matter how hard they try.  Of course, the fleece of the ewe, above, is, in my opinion, heavily retouched in modern times.

Finally, here are two photographs from that same Kunst der Antike, which I have never seen in any other publcation to which I have access.  They uniquely have centaurs erotically driven just as the Berthouville ones are, and placed alongside the walls of the black room of the House of the Vettii.  KdI, p. 726, nos. 588 and Taf. XXXVIII.  They are "from Pompeii" but no house is cited so that presumably, like the reliefs above, they must have come from early, undocumented digging. 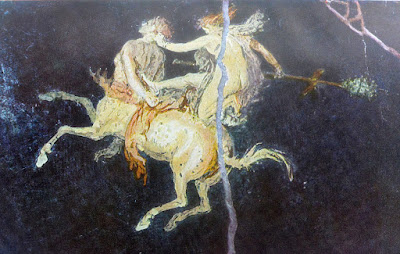 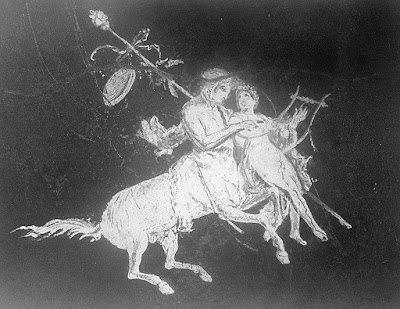 I don't see how they could be forgeries, but one may ask how heavily retouched they may have been, especially the one reproduced only in grayscale.  Could they have been destroyed in one of the Naples earthquakes?  If so, however, the colorplate made anew by the Propylaeen Verlag expressly for KdA would be well worth reproducing, for example (quite apart from the Berthouville cups) as a comparandum to the Borghese and Furietti centaurs.
If my dear friend P. G. Burbules hadn't found this ex-library copy and sent it to me, I'd never have seen it, either.  And now, unless they find these centaurs right here, neither will anyone in Bozerman, Montana (whose State College deaccessioned it).

Does anyone know about these centaurs?
They share their sentiments as well as their types with the Borghese Centaur and the Berthouville cups.

8 July 2016.  As I listen to discussion of the disadvantages of being non-white, I must wonder whether living in states where it is assumed that Nobody reads German or is interested in centaurs...  All credit to Texas as to California, anyone in our state universities has a chance to be a lucky Nobody.